Stories About Overcoming Challenges And Obstacles

From time to time we face smaller or bigger obstacles in our life. All people need to deal with challenges and failures on their way, and their attitude towards those challenges plays the most important part. The person with positive attitude towards obstacles gradually becomes stronger and more successful. And in contrary, the person with negative attitude becomes more and more depressed, weak and unhappy. The secret is our attitude towards obstacles - do you accept it like a lesson from life and try to learn something from it, or do you just blame everyone around and feel anger? On this page we present you a nice collection of short inspirational stories about overcoming challenges, obstacles and adversity in our life. 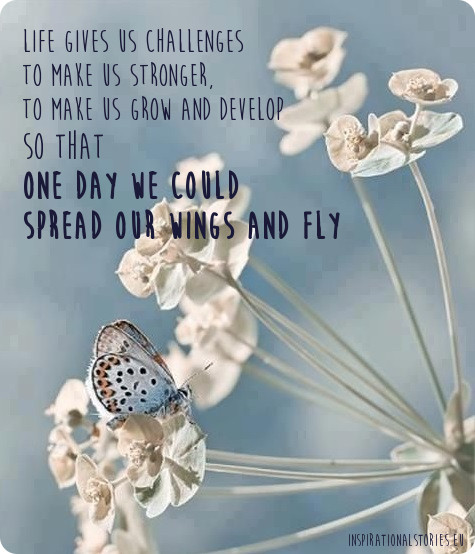 Inspirational stories about determination and persistence

Moral stories about the power of thoughts

Stories about letting go of the past 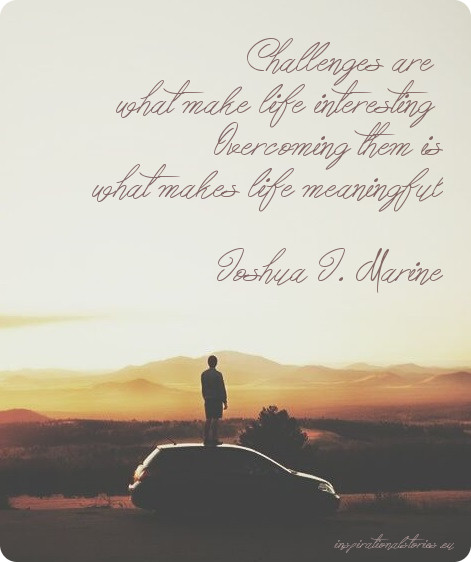 My friend Jerry was one of the most positive people I had ever known. He was always in a good mood and always had something encouraging to say.

He was a manager at a restaurant. If his employee had a bad day, Jerry always helped him to look on the positive side of the situation.

Jerry‘s attitude truly amazed me. So one day I asked him: „How can you be so positive all the time?“. He replied: „You see, every morning I tell myself, that I have two choses for that day – to be in a good mood or in a bad. I choose the good one. And when something wrong happens, I can be sad and angry or I can learn from it instead. I choose to learn. Thus I choose the positive side of life“. I said: „It is not that easy“. He replied: „Yes it is. Life is all about choses. You can choose how people or situation will affect your mood, your life“.

One morning Jerry left the restaurant‘s back door open and was held up at gunpoint by three armed robbers. He tried to open the safe, but his hands shook due to nervousness and he slipped off the combination. So the robbers shot him. Fortunately, Jerry was quickly found and brought to the nearest hospital. After many hours of surgery and long intensive care, Jerry was released home.

When I met him, I asked what his thoughts were during the robbery. „I thought that I should have locked the back door“, he replied. „Then, when I was lying on the floor, I remembered about my choices in this case: a choice to live and a choice to die. I chose to live.“

I asked, if he was scared. Jerry continued: „When they wheeled me into emergency room and I looked at the faces of doctors, I got truly scared. I knew that I need to do something. So when the nurse asked me, if I was allergic to anything, I replied „Yes“. Doctors and nurses stopped working as waited for my answer. I took a deep breath and yelled „Bullets“. They started laughing and I said: „My choice is to live, treat me as I am alive, not dead“.

Now Jerry is alive owing to skills of his doctors, however his amazing attitude played an important role too. I learned from him, that every day we should choose to live fully no matter what.

One day a dull and exhausted by the illnesses and burdens of life peasant came to the wise man. He sat in front of the wise man, who gave him a heartfelt and warm smile. The peasant breathed out heavily letting out a wave of mourning. He began complaining about his life, that he has a hard burden that he doesn’t see a bright daylight at all, it’s like one problem falls on his head or the other – they have twisted him between the grindstones so much that he can’t even breathe in some fresh air. Later, he began blaming all of his relatives, who, in his opinion, were guilty for his misfortunes, whether the circumstances didn’t turn out right for him, or something else.

The wise man listened to him in silence, and when the peasant once again contritely inquired the wise man, why is it so unfair, what should he do and how to find peace, the wise man got up from his seat and invited the peasant to follow him.

They came out of the hut and went to a lakeside, which was not far away and where from time to time flying fishes were jumping, trotting fast above the surface, catching food.

The wise man led the peasant to the lakeside and said to him:

“Do you see the smoothness of the lake? The depths are full with life. There are fishes that always stay in water, and if suddenly the lake got polluted, they couldn’t see further their own nose, they would hardly recognise where the source of the pollution was, and they would keep swimming in circles. And there are also fishes that got wings and they can rise above the water of the lake, looking at it from the heights of their flight. So this is my advice: instead of complaining about your life, come to this lakeside from time to time, watch the flying fishes and try to understand what I wanted to say to you.”

The Snake was crawling on the ground. The Eagle flew to her and said:
– How unfortunate you are, doomed to crawl all your life. Not like me – I am destined to fly.
The Snake looked at the Eagle and said:
– You are right Eagle, I can’t fly. But only I know what it means to fly.
– How can you know that? – The Eagle smiled, – you don’t have wing!
– Thoughts are my wings, – said the Snake proudly, – Dreams are my heaven. While crawling on the ground I close my eyes and I see the heaven. I imagine that I’m crawling in heaven not on the ground. Yes, it’s impossible to crawl in heaven, you can only fly. It means that in those moments I am flying. In my free thoughts I am learning to fly, Eagle. With my soul I am arising to the high heaven, so when my time comes and my life as a snake comes to an end, I could ascend into the blue heaven, into the endless heaven and fly, to fly and not think about anything, enjoying my freedom. And I won’t be afraid to fly, because it won’t be a new thing for me. For you Eagle, the wings were given as you were born, but not for me. But the heaven will make us equal. We will be flying together one day, Eagle, under the clouds. Only I will be stronger and freer than you, because I have learned how to fly without having wings, simply crawling on the ground. Both things are available for me. I am not afraid to lose my wings because I know how to crawl, and I am not afraid to gain wings because I know how to fly. And what will you do, Eagle, if you lose your wings?