Two families lived nearby. One family had constant quarrels and the other one lived quietly and friendly.

One day, feeling jealous about nice atmosphere flourished in the neighbouring family, wife told her husband:

– Go to the neighbours and look what they are doing for such well-being.

The husband came, hid and started watching. He saw a woman who was wiping the floor in the room. Suddenly something distracted her, and she ran to the kitchen. At that time her husband rushed into the room. He did not notice the bucket of water, occasionally kicked it, so the water overflowed.

Then his wife came back from the kitchen and said him:

– I’m sorry, honey, it’s my fault because I did not remove the bucket from the pass.

The man returned home, where the wife asked him:

– Did you understand the reason of their well-being?

– I guess that I did. You see, we always seek to be right, while each of them takes the blame on himself.

I was waiting to pick up a friend at the airport. That day I had one of those experiences that change people‘s lives. It happened just two feet away from me. I noticed a man, carrying two bags, coming toward me. He stopped next to me to greet his family.

First of all he laid down his bag and came closer to his younger son (about six years old), they gave each other a warm, loving hug. Then the father looked in his son‘s eyes with words: „I missed you so much, it‘s so good to see you, son!“. The boy smiled and said: „Me too, dad“.

Then the man talked to his older son (nine or ten years old). „Oh, you are quite the young man, I love you very much!“ and cupped his face. Then they had the most tender hug too.

Afterwards the father said „Hi, baby girl“ to his baby daughter. She was squirming excitedly in her mother‘s arm and watching her returning father all the time. The man gently took his little daughter, quickly kissed her face all over and then held her close to his chest. The little girl laid her head on his shoulder in pure contentment.

After several moments the man looked at his wife and said „I‘ve saved the best for last“ and shared with her the most passionate kiss. They stared at each other, beaming big smiles. They reminded me of newlyweds.

Suddenly, I heard myself asking „Wow, how long have you been married?“. „Been together fourteen years, and married twelve of those“ . „Well then, have long have you been away?“. He replied with joyous smile on his face: „Two whole days!“.

I was stunned, as I imagined that he had been gone for several weeks at least. I could only say: „I hope that my marriage is still that passionate after twelve years“. The man looked straight into my eyes and told me something that changed my life: 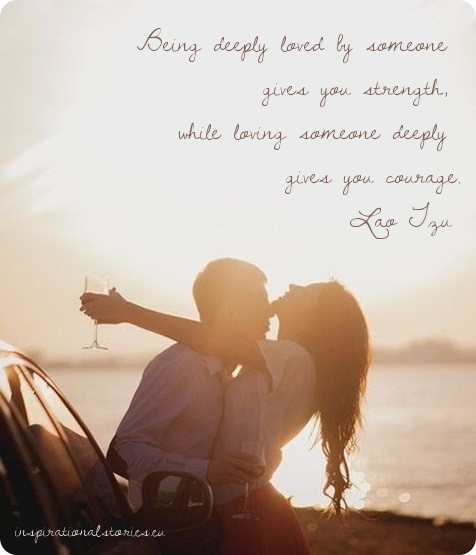 Parents had a son, who was diligent and hard-working. When the son grew up, his father found him a rich bride.
– Dear parents, I don’t need your bride, – the son disagreed. – She’s grumpy and doesn’t know how to do anything. I fell in love with a hard-working and cheerful girl and I want to marry her.
– Who is she? – asked the parents in surprise.
– Our maid. Don’t you see how nice and beautiful she is, how she works from dusk till down? – The son answered.
Parents got mad. Their family was rich and they wanted to be even richer. They fired the maid, but the son didn’t forget the girl.
Then his father told him:
– If you want to marry a poor girl, you have to leave our house. I won’t give you anything.
– It’s not a problem, father. The most important thing is love, – the son said and left.
He started living with his young wife soul to soul. Soon, his mother came to visit her son. She stayed for one day and said:
– My dear Son, at our home we were eating pies and here you have only black bread. At our home you used to sleep on a featherbed, and here – on straws. Do you really like it?
– A person’s home is where he loves and is loved, – the son answered.

A husband and wife have been

A husband and wife have been living together for 30 years. On the 30th anniversary of their marriage the wife, as usual, has baked the bun – she baked it every morning, it was a tradition. During the breakfast she cut it across, buttered both sides, and, as usual, gave the top to the husband, but her hand stopped halfway…

She thought: “On the day of our 30th anniversary I want to eat this rosy part of the bun; I was dreaming about this for 30 years. Finally, I was an exemplary wife for 30 years and I raised good sons for him. I put so much efforts and health for the well-being of our family.”

So she made a decision and gave the bottom of the bun to her husband, but her hands trembled – breaking the 30-year-old tradition! Her husband took the bun and said to her:

-What a wonderful gift you gave me today, my dear! 30 years I did not eat my favourite –bottom- part of the bun, because I thought that it rightfully belongs to you.