It is important to know that person's character plays the leading role in his road to success and happiness. There are no chances that the man with a bad temper will gain a true success in his life, he'll face endless obstacles if he will not continuously improve his own character. Here on this page we present you some  moral stories about character. 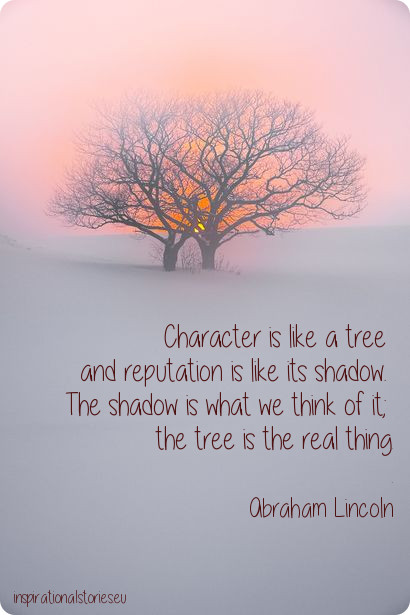 A long time ago there was a boy. He was smart, talented and handsome. However, he was very selfish and his temper was so difficult, that nobody wanted to be friends with him. Often he got angry and said various hurtful things to people around him.

The boy‘s parents very concerned about his bad temper. They considered what they could do and one day the father had an idea. He called his son and gave him a hammer and a bag of nails. The father said: „Every time you get angry, take a nail and drive into that old fence as hard as you can.”

The fence was very tough and the hammer was heavy, nevertheless the boy was so furious that during the very first day he has driven 37 nails.

Day after day, week after week, the number of nails was gradually decreasing. After some time, the boy started to understand that holding his temper is easier than driving nails into the fence.

One day the boy didn‘t need hammer and nails anymore as he learned to hold his temper perfectly. So he came to his father and told about his achievement. „Now every time, when you hold your temper all day long, pull out one nail“.

Much time has passed. At last the boy could be proud of himself as all the nails were gone. When he came to his father and told about this, he offered to come and take a careful look at the fence. „You did a good job, my son, but pay your attention to the holes that left from the nails. The fence will never be the same. The same happens when your say hurtful things to people, as your words leave scars in their hearts like those holes in the fence. Remember, we need to treat everyone with love and respect, because it doesn‘t matter, that you say you are sorry, the scars will not disappear.

Stories about reaching goals and dreams

Stories about letting go of the past