On this page we present you some funny stories about marriage life.

– Let us now do something really exciting.

These words brought to her mind pictures of pleasure jaunt through the night city. 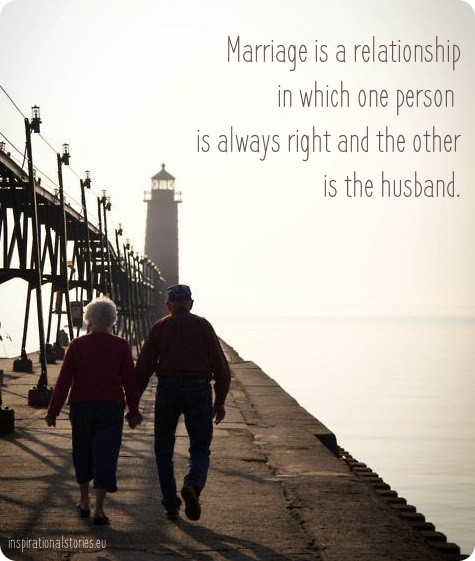 One married couple moved to the new apartment. In the morning a wife, just after waking up, looked through the window and saw a neighbouring woman, who was hanging out her linen to dry.
— Look at her dirty linen — she told her husband.
But he continued to read the newspaper and didn’t pay any attention to her words.
— Perhaps her soap is bad or she does not know how to wash, we ought to teach her!
And every time the neighbouring woman was hanging out her linen, the wife was surprised how dirty it was.
One morning she looked through the window and screamed:
— Oh! Today the linen is pure. Probably the neighbouring woman learned to wash it at last!
— No, it’s not, – her husband answered — today I just woke up a little bit earlier and washed up a window.

One married couple came to visit their friends at the other end of the country. Their friends took them to the races. Fascinated by overlooking the horses raced around the racecourse, the husband and wife were playing sweepstakes all the evening, while only two dollars have left in their pocket.

Next day the husband said that he would go to the races alone. In the first race he put two dollars on the outsider, and the horse came to the finish first. He put all his winnings on the next race and won again. That day, he was very lucky; his winning has reached fifty seven thousand dollars in the evening.

On the way home he saw a gambling house. The inner voice, the one that told him today, what kind of horse he needed to put his money on, said:

A man came inside and saw roulette before him. The voice said:

A man put all fifty seven thousand dollars to the number thirteen. When the roulette stopped, the dealer announced:

He returned home with empty pockets. His wife asked, meeting him near the door:

Her husband shrugged the shoulders: