Women are truly amazing creatures. Tender beauty and strong character, sharp mind and loving heart, endless devotion and unshakable dignity.. There are so many things that need to get together in one person. On this page we present you inspirational stories for women about the mystery of woman's soul. 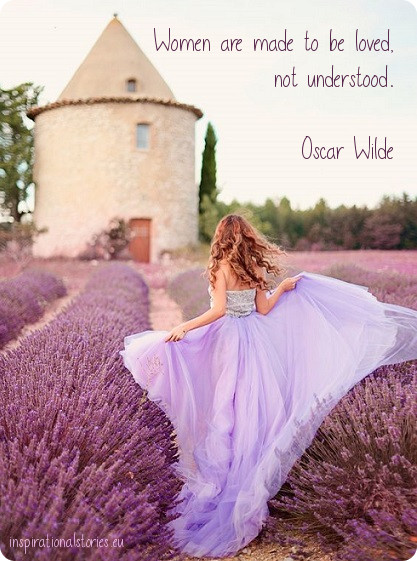 One day Adam came to God asking to create a partner for him, because he was tired of loneliness. After considering it, God decided to create a Woman and wished to create her wise and harmonious.

So He took a little bit of gentleness and tenderness from the morning dew and added there a little bit of strength and stiffness from the rocks which formed the mountains. Later He took a little bit of assertiveness from the water flow and a bit of flexibility and pliability from the clay, a bit of kingship from the lioness and a little of meekness from the dove, a little bit of kindness and warmth from the evening sun and added there a couple of drops from the vial ‘Severity’. He took equal parts of the endurance of the ox and fragility of a wildflower, the mystery of the night and the clarity of the day; He added to His masterpiece a little bit from the twitter of the birds and from the silence of the celestial heights, for courage He added defencelessness, for sharpness – naivety. He wanted to add some other qualities, but he changed His mind. He decided to leave an empty space for creativity of the Spirit. For the last strokes God gave His masterpiece two talents: be a good mother to her children and a good wife to her husband, and so that the woman, by inexperience, wouldn’t mix those talents, God divided them and hid them in different parts of her nature.

By putting all of these qualities together in a Woman God breathed life into her.

So the Woman, spirited and full of Life, stood in front of God as he created her in the fullness of herself. She wished to look at herself immediately, that is why she glanced at her reflection in the waters of the lake and smiled because her appearance was so beautiful. She was happy, but soon she glanced inside of her depth and she was frightened of what she found inside. She turned to God with bitterness in her voice:

– Is that something you can call harmony? How can I combine so many oppositions that are inside of me? And where is the wisdom that was promised to me?

And then a soft golden light poured on her, and she heard the voice of God:
– That’s what you will have to learn.