Any great goal cannot be achieved without patience and persistence. If we truly want something, we need to do tough thing instead of fun thing and probably we will have to delay the gratification. Here we present you a collection of inspiring stories about reaching goals and dreams.

Stories about reaching goals and dreams 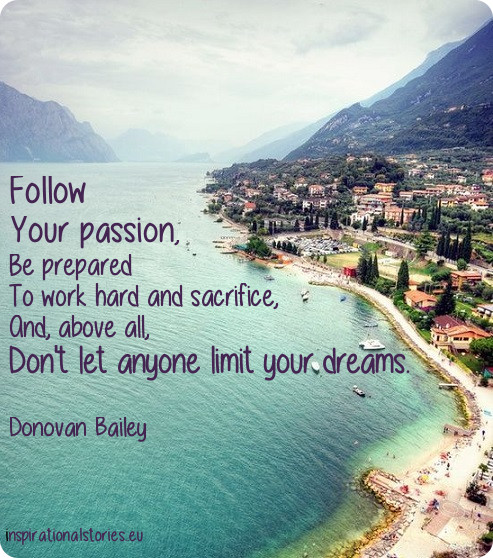 One day a son came to his father for an advice:
– Dad, I can’t do this anymore, – he said, – those lessons only exhaust me, and the result doesn’t change. It must be not destined for me to play football and my dream will never come true.
The father looked at his son with loving eyes and said:
– You know son, every person in life has a dream, a goal of his life. They are the ones that make us do what we are doing, because it’s what we should do. We have to fight for what we believe in, what we feel. In other case, you will simply brake. Once – and for all.

The easiest way is to quit everything and not go until the end, because the path is difficult and we are not used to inconveniences. We want everything to be easy and at once. But the wishes are fleeting! This is how our dream dies, and the goal becomes unreachable.

Gradually, life becomes a routine without depth and meaning. Then one day, we try to forget and start everything from the beginning, we wait for a new day to make our life different. But new obstacles come in our way, and we stop again. We become full of despair and anger for our own helplessness.

But you only need to remember one thing: never give up, fight, battle. It doesn’t matter that you have lost one battle and even dozens of battles. Life goes on! Your biggest enemies are hiding in you – laziness, fear, doubt, indecision. Be a warrior of your dream, a knight of your goal and a soldier of your wishes!

Stories about the power of thoughts 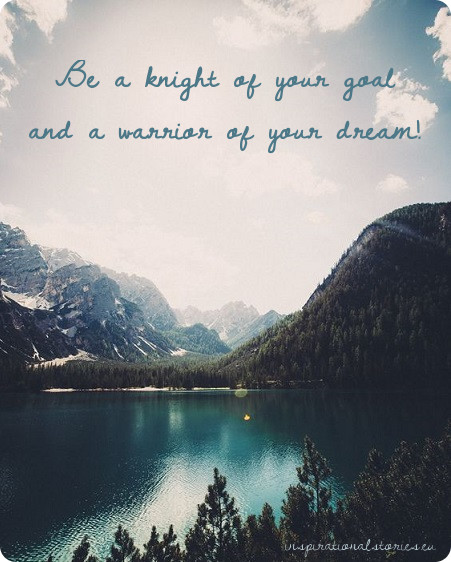 One man decided to reach for his dream. But he didn’t have enough strength to do it. So he turned to his mother:
– Mother, help me!
– Darling, I would be glad to help you, but I don’t have it. And everything I have, I already gave to you…
He asked a wise man:
– Master, tell me, where can I get strength?
– It is said that, it is on the Everest. But I couldn’t find anything there, except the snowy winds. And when I came back, the time was irretrievably lost…
He asked the hermit:
– Holy Father, where to find the strength for realization of my dream?
– In your prayers, my son. And if your dream is false, you will understand it and find peace in your prayers…
The person asked everyone, but the only result of his searches was confusion.
– Why are you so confused? – asked an old man passing by.
– I have a dream, good man. But I don’t know where to find strength for its realization. I asked everyone, but there was no one who could help me.
– No one? – a light flashed in the old man’s eyes, – And did you ask yourself?

If all wishes come true 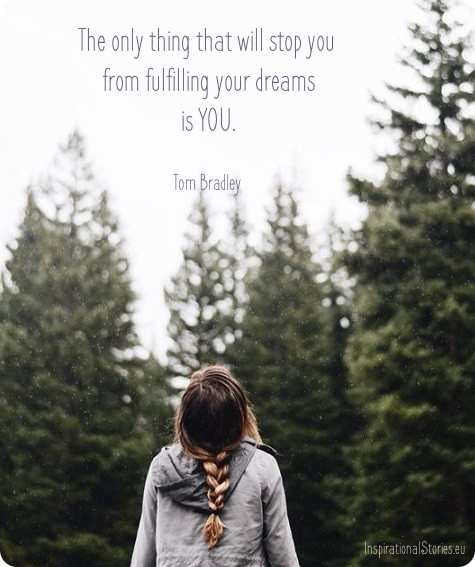 Sometimes we think that we would be happy if all our dreams come true. However, it’s the process of achieving our goals and it’s the road towards our dreams that enriches us and makes us happy.

There was a little, but always cranky girl. Everything was bad for her. It wasn‘t enough toys, the gifts she was getting were wrong. She wished to meet an enchantress that would turn her life a fairy tale.

One day an enchantress came to the little girl and said that she will fulfil one of her wishes. The girl became very happy at first, but then she started to think: she had a lot of wishes and all of them were important for her. The girl thought for a long time, she could not choose just one. Then kind enchantress said that she gives her the fulfilment of one wish every day. The girl became happier: now all her dreams will come true. She thanked kind enchantress and ran home.

From that day she was waiting for every morning with joy and enthusiasm: because one more dream will come true for her. The days passed, the dreams came true… But soon the little girl realized that fulfilment of the wishes does not give her joy and happiness which she hoped for. Many wishes brought her disappointment, and some even a pain. Almost every dream was an empty little girl’s caprice. Being satisfied, she suddenly realized that she did not want this.

The girl was getting sadder and sadder day by day, and wish-fulfilment did not bring any joy to her. Soon she started to fear her own dreams.

So the girl went to the kind enchantress and asked her to take her terrible gift back. She was afraid to live, afraid to wake up every day, waiting for an imminent execution of another wish. Crying, she asked an enchantress to fulfil only one her dream: to live as she lived before and enjoy life. And that her many wishes would remain only the wishes, from which she will select the one she will bring to her life.

Kind enchantress had mercy upon the little girl. She waved her magic wand and disappeared. The girl ran home. She was happy, because she knew that now she would laboriously seek for her one big cherished dream, not wasting time with short-term, in fact, quite unnecessary whims.

Young king, who has just begun to rule, had a dream about an angel that said him:

— I will fulfil one your wish.

In the morning the king has called his three advisers:

— An angel promised me to fulfil one my wish. I wish that people of our kingdom would live happily. Tell me, which kingdom do they need?

— The kingdom of wishes! — One of advisers said immediately.

The second and third advisers wanted to say something, too, but did not have time: young king closed eyes and called an angel in his mind.

— I wish that the desires of all citizens would be fulfilled. Let my kingdom be the Kingdom of wishes…

From that moment strange events started to happen in the whole kingdom. Many people became rich, some huts turned into palaces, someone get wings and started to fly; the others became young.

People became sure that their wishes are being fulfilled immediately and everyone started to wish more than the other one. But soon they discovered that there was a lack of wishes and began to envy those who still had wishes.

Therefore they greedily stole wishes from the neighbours, friends, children …

Many people were overcome by the anger and they wished something bad to others. Palaces were collapsing and new palaces were built on their places immediately; someone became a beggar and started to send calamities to others. Someone moaned in pain and then gloated sending more painful sufferings to other people. Peace and harmony disappeared in the Kingdom of wishes. People feuded, sent the arrows of spite and ill will to each other. One man excelled the others in his craftiness: he wished a dangerous disease for himself and tried to infect it other people hugging, kissing them, and shaking their hands. The first adviser immediately dethroned the young king and proclaimed himself as a king. But soon he was dethroned by another man, that man was dethroned by someone else and a scramble of thousand ruthless wishes began around the throne.

The young king run away from the town and met an old man on the edge of the kingdom.

The old man was ploughing the land and singing a song.

— You have no wishes? — The king asked the old man with surprise.

— Why don’t you fulfil them immediately like other people do?

— Because I do not want to lose happiness like all citizen of your kingdom did.

— But you are poor, and may become rich; you are old, and you may become young!

— I am the richest man, — the old man answered. — I plough the land, sow and so build up a pearl path from my Heart to my God … and I’m younger than you, because my soul is like a baby’s.

The king said with regret:

– If you were my advisor, I would not have made a mistake.

– I was your adviser, who you did not listen to, – said the old man with no sense of reproach and continued to plough the land.