If you wish to be more happy there is one simple thing that you can do - just be more kind. Researches show a positive correlation between kindness and happiness. Engaging in a random act of kindness improves your happiness level. On this page you will find inspirational stories about kindness. 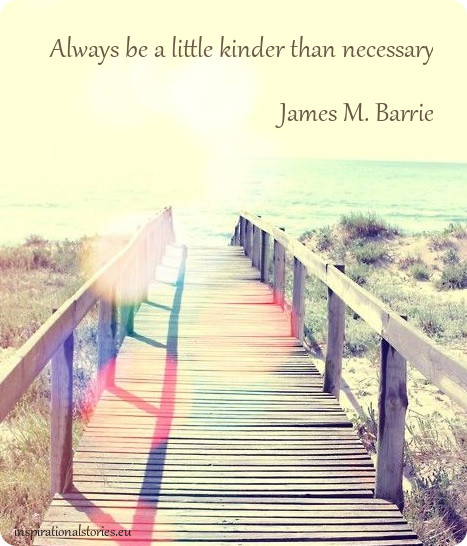 A poor boy was selling goods from one door to another to pay for his studies. One day he found that he had only one dime left, and he was hungry. While approaching the next house, he decided to ask for a meal.

But when a young woman has opened the door, he only dared to ask for a glass of water. She looked at him and understood that probably the boy is hungry. So she brought him a large glass of milk. He drank it and then asked how much he owed her. The woman replied: „You don‘t own me anything. Mother taught us never to accept pay for a kindness“. „Then I thank you from the bottom of my heart“, – he said and felt that now is stronger not only physically, but his faith in God has grown as well. The boy‘s name was Howard Kelly.

Many years have passed. One day that woman became seriously ill. Local doctors could not help her. Therefore they sent her to a big city, where her rare disease would be studied by specialists. Dr Howard Kelly was called in for the consultation. When he entered her room in the hospital, he immediately recognized the woman, that showed kindness to him, when he was poor. The doctor was determined to do his best to help her recover from her disease.

The struggle was long, but together they managed to overcome her illness. After some time the woman received a bill for her treatment. She was worried that the amount to pay would be so significant, that it would take the rest of her life to pay for it. Finally, when the woman looked at the bill, she noticed words that were written on the side of the bill. The words were: „Paid in full with a glass of milk“.