Inspirational Stories About Courage And Bravery

It is said that courage is not the absence of fear. Courageous people have the same feelings, they are also afraid of some things, but truly brave person manage to triumph over his fears. On this page you will find a collection of short inspirational stories about courage and bravery. 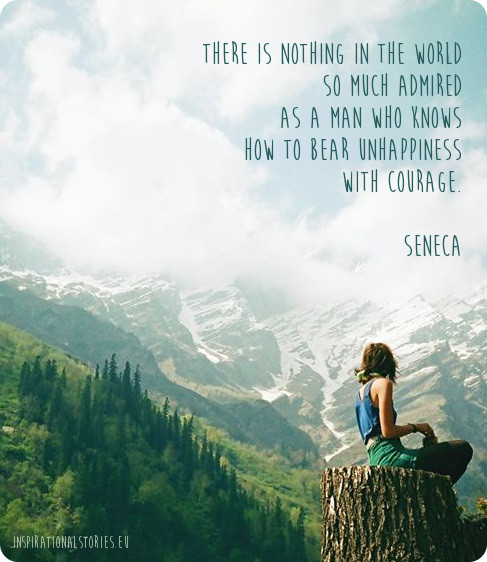 Late in the evening I was walking in the park. Suddenly I heard scream coming from behind bushes. I stopped to listen and understood that a woman was attacked. I heard sounds of fighting and muttering. For several moments I was hesitating, should I get involved?

I panicked. I was frightened for my own safety. Maybe it is better to call the police? Then I realized that a woman‘s voice becomes weaker, so I knew I have to act quickly. Can I run away from this? Finally I decided that I have to help this unknown woman even if I am risking my own life. I felt some strange transformation inside, the moral and physical strength, so I ran behind the bushes. I pulled the attacker off the girl. We felt to the ground and grappled for several minutes. Then the assailant jumped up and ran away.

Breathing hard I slowly came up to the girl, who was cowering behind a tree. It was dark, so I could not see her face clearly. I felt, that she is very frightened, so I talked to her from a distance: „You are safe now, it‘s ok, the man had run away“. After a few moments I heard her words with a great amazement in her voice: „Dad, is that you?” And then I realized that the girl was my youngest daughter.

Short story on bravery and courage

One cowardly person came to a master of martial arts and asked to teach him bravery. The master looked at him and said:
– I will teach you only with one condition: one month you will have to live in a big city and tell every person that you meet on your way that you are a coward. You will have to say it loudly, openly and looking straight into the person’s eyes.
The person got really sad, because this task seemed very scary to him. For a couple of days he was very sad and thoughtful, but to live with his cowardice was so unbearable that he travelled to the city to accomplish his mission.
At first, when meeting the passers, he quailed, lost his speech and couldn’t contact anyone. But he needed to finish the master’s task, so he began to overcome himself. When he came up to his first passer to tell about his cowardice, it seemed to him that he would die from fear. But his voice sounded louder and more confident with every passing day. Suddenly came a moment, when the man caught himself thinking that he’s not scared anymore, and the further he continued doing the master’s task, the more convinced he was that the fear was abandoning him. That way a month had passed. The person came back to the master, bowed to him and said:
– Thank you, teacher. I finished your task. Now I’m not afraid anymore. But how did you know that this strange task will help me?
– The thing is that cowardice is only a habit. And by doing the things that scare us, we can destroy the stereotypes and come to a conclusion that you came to. And now you know that bravery – is also a habit. And if you want to make bravery a part of yourself- you need to move forward into the fear. Then the fear will go away, and bravery will take its place.