It is said that belief is the first key to success in everything that you are doing. Belief and confidence gives us strength that is necessary in reaching our greatest goals. Here we present you a short inspirational story about belief, illustrating that. 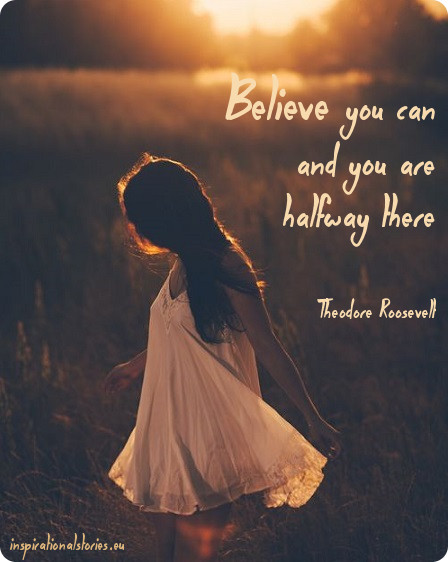 One businessman was in debt and couldn’t figure out a way out of it. Creditors were pressing him. Suppliers were demanding for a payment. He was sitting on a bench in the park with his head down, thinking what could save the company from bankruptcy. Suddenly, an old man appeared in front of him.
– I see that something is bothering you, – he said.
After listening to the businessman, the old man said:
– I think I can help you.
He asked the businessman, what his name was, wrote him a check and said:
– Take this money. We will meet here exactly in one year, and you will be able to return it to me at that time.
After that, he turned around and disappeared just as suddenly as he appeared.
The businessman saw a check in his hands for an amount of 500 thousand dollars, signed by John Rockefeller, one of the richest people in the world at that time!
‘I could end all of my problems in no time!’ – He thought. But instead, the businessman decided to put the check into his safe. Only one thought about its existence gave him strength to find a solution to save his business.
With the return of his optimism, he concluded profitable deals. During a couple of months he got out of debt and started to earn money again.
Exactly one year later, he returned to the park with the same check. At the agreed time the old man appeared again. And at the moment, when the businessman wanted to return the check and to share his story of success, a nurse ran up and grabbed the old man.
– I’m so glad, I caught him! – She exclaimed. – I hope he wasn’t bothering you. He always runs away from the house and tells he is John Rockefeller.
The businessman was bemused. During the whole year he was spinning and building a business, buying and selling, convinced that he had half a million dollars. And suddenly he understood that it’s not the money, real or imaginary, that turned his life up. It was his new confidence and belief that gave him strength to achieve everything that he had now.